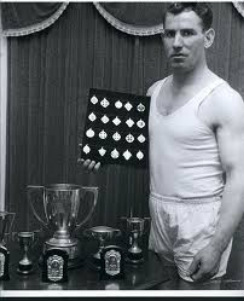 
In our lifetime those of us who are fortunate enough to have known people who have had success in various areas of life but the real heroes and especially in sport are those who come from humble beginnings and overcome all the obstacles to reach the top.

One such person was Paddy Bollingbroke who was born in Kilbride Cottages in Swinford in 1931. His late father, Stephen, was the Town Cryer.
Paddy had a tough life but thanks to the people who cared for him, he achieved the ultimate – All Ireland Handball titles on five occasions. His career in handball started off in the old open handball alley in Swinford. The alley now has a back wall but in Paddy’s youth the ball would regularly cross the river resulting in the return having to be made from the main road, which task Paddy had no problem with. This stood Paddy in good stead and when he played in a standard alley with a back wall it’s no wonder he could split the Half Solid on the key stone.

Apart from the All Ireland titles, he achieved success in numerous other competitions.

Paddy, was also very successful in playing G.A.A. football and won medals with both Castlebar Mitchell’s and Swinford. He was a natural player and even when he turned out to play in his wellingtons he could still make his mark.

Apart from his athletic skills Paddy Bollingbroke was also a nice guy, astute card player and a gentleman to all who had the privilege to know him. Paddy died at the age of 58 and lies in peace in Plot 171 in Kilconduff.